Skip to main content
Posted by The Attic February 11, 2019

In June and in August 2018, I curated two relabeling museum takeovers at New Walk Museum in Leicester, involving refugees and asylum seekers in the (temporary) rewriting of labels of the museum’s permanent collection. The projects involved a number of institutions and individuals who worked in cooperation to develop a series of events, of which the relabeling takeovers were one component. The individuals involved were primarily the refugees and asylum seekers who were regular attendants to creative writing classes at City of Sanctuary, a creative writing teacher, the Outreach Officer at New Walk Museum, and myself. The first event took place in June 2018 during Refugee Week, while the second edition took place during Journeys Festival International in August 2018. 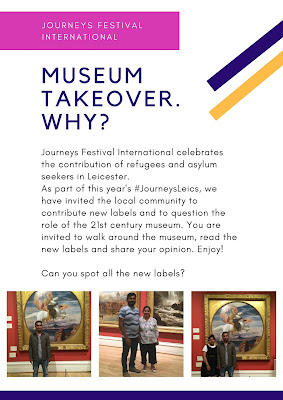 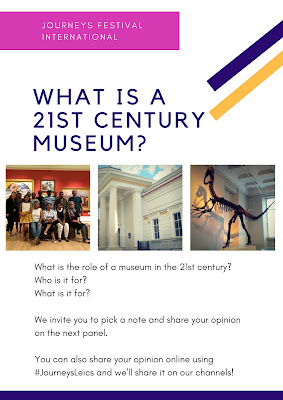 The Making of a Relabeling Museum Takeover

From the outset, I had stated that this was an event that needed to be both desired and produced by the communities involved, not a showcase of a community for the benefit of an institution’s reputation. It is with this idea in mind that during a meeting in the planning for Refugee Week events, I asked the group if they wanted to do anything with the objects themselves (in addition to investing the museum space). It became clear that many had not been to the museum, so a first trip was necessary. The first visit was a great way to discover the space, and to strengthen the bond with the group (I had been a regular attendant at the creative writing classes). The room that instantly caught their attention is the World Arts gallery which holds objects from around the world, including some from their original countries. Many were thrilled, others were emotional, but undeniably, they connected instantly with objects in an institution that had until then been alien and distant to them. They had stories to tell about these objects. This is how the museum relabeling was born: individuals connecting to museum objects through storytelling. It became evident that the labels that had been assigned to these objects were really quite distant and lifeless compared to the many stories that they had to tell about these objects.

The writing process was as follows: each person picked one object in the museum; we took pictures of these objects to make sure we had them assigned; and then we sat in a room to write the new labels. The labels were written exclusively by the refugees, with no editing, but with the help of the experienced writing teacher who brilliantly helped them put oral stories into words and sentences, and to help those with English difficulties (there is a great disparity in English level in the groups that attended the classes, but all were invited to contribute). There were also a few translators involved at times. I did not edit the labels afterwards, as it was important to have their voices on the labels. The result of these writing sessions – which were done over a cup of coffee in a community atmosphere, sharing stories, pictures and memories – was the production of 15 labels for the first edition, and another 10 for the second edition.


The stories they tell are personal stories. Cloud from Zimbabwe wrote about a spoon that reminded him of his mother’s cooking, and was emotional at the memories this object brought. He asked to have the picture of his mother on display next to the label. Rosemary from Nigeria disagreed with the interpretation of a textile from her country of origin and wrote a new interpretation of this object. Four men from Eritrea wrote about a Chinese horse which made them think about their long journey through the desert of Sudan, and how they wish they had had a horse. These are only three examples of labels that were produced by individuals who had stories to share about the objects in the museum, bringing personal stories to objects that have been static, somewhat forgotten in this room of the museum. In many ways, they complement the existing labels in the museum, by bringing a human dimension to the existing interpretations.


Disrupting narratives through storytelling is a powerful act. In bringing a wealth of knowledge and experience to a disparate collection, the men and women who wrote these labels disrupted the gallery in a positive and necessary way: they brought new depth to this collection, but they also brought a new meaning to the 21st century museum by having their voice – so often ignored – heard in the institution. 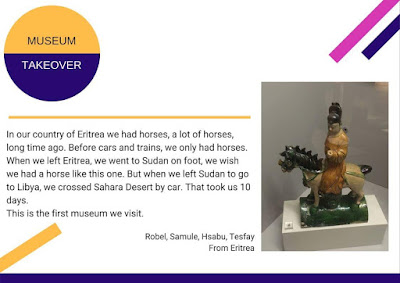 The second edition of the relabeling took place during Journeys Festival International, a festival celebrating the contribution of refugee artists. On this occasion, we had 25 labels on display at the museum. In addition, I produced 5 panels which explained the project, questioned the role of a museum in the 21st century, while one panel presented a poem on being a refugee written by the group during a previous creative writing class. These panels grounded the project in current discussions around the role of the museum as an institution and the place given to refugees, asylum seekers and marginalized communities in the 21st century. Some of the individuals involved in the project were present at the museum on both occasions and talked about their labels in an informal setting in the galleries. They had also asked to have their pictures on display on the panels, and after they regretted that some of the institutions had put generic pictures (of other people) on the programs, I did a photoshoot with the participants in the museum’s Victorian Gallery and these pictures were featured on the panels. They are also in the exhibition catalogue, which is available online. The participants have given positive feedback about their experience, one noted that ‘it changed my life’ to have his labels on display in the museum, and a woman said that she ‘would have never imagined being in a museum’. 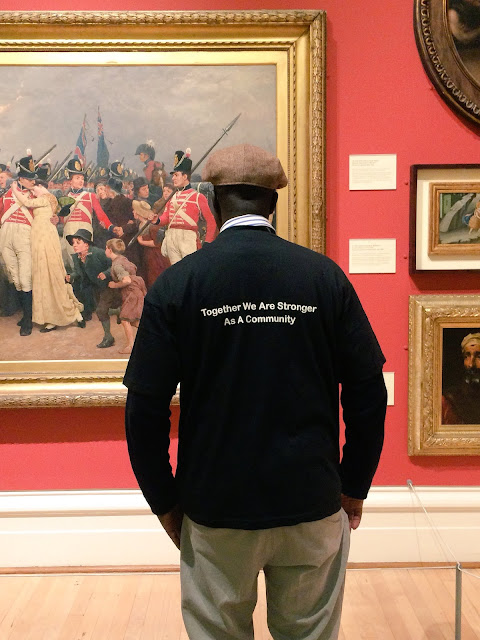 The public reaction was also positive, with a great number of visitors noting that this is a ‘brilliant way of keeping museums relevant to the community’, another noted the ‘powerful labels, really well written and engaging, linking objects to contemporary lives’ while another one commented: ‘I wish institutions recognized the value and potential of these projects. They should not be temporary.’ However, there were also concerns expressed about the co-production aspect, with one person asking ‘were the participants paid?’ and ‘how were they supported through this process? What did they get in exchange?’ These very legitimate questions highlight the limitation of museum takeovers that engage marginalized communities: these two relabeling takeovers offered them a unique opportunity to engage with the museum and its objects, and to share their stories with the public, but the ephemeral nature of these events raises an important question: what next?


It is evident that museums need to be proactive in engaging with refugees and asylum seekers throughout the years and to make further effort to integrate these communities (and other) in their audience and to think further about the meaning of co-production. In the future, I hope that museum takeovers are no longer necessary, because the voices of refugees and asylum seekers will no longer be silenced. Disputing narratives and anchoring the museum in the 21st century is about celebrating a multiplicity of voices, not one day a year, but all year long.

Dr Angela Stienne is Honorary Research Fellow at the School of Museum Studies, University of Leicester. Find out more about Angela on the University website, and on Twitter.

This makes me REALLY angry - I guess that's the fault of the anti-depressants (ha!)