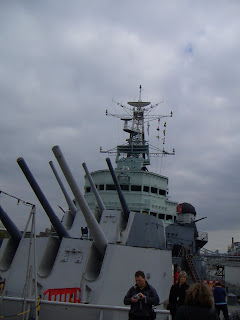 We only had a couple of hours to run round HMS Belfast in London and what follows is not the best review ever but I wanted to try and give you a flavour of the museum which is located inside an old warship. I did not have high hopes at first but as we went round I actually found myself enjoying the funny displays of life at sea. 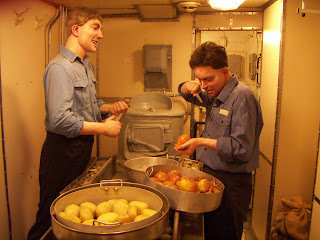 Firstly I will get my chief moan out the way.... I HATE audio guides with a passion. Museums for me are about shared experiences and I'm sorry but audio guides totally kill any hope of that. In my experience people are too busy listening to talk. But there we are, moan over and done with now.
HMS Belfast does not really need a museum, it could just be the shell of the boat and that would be fascinating enough to wander around. Under the cabins and living spaces it is a grotto of dials, levels, pipes, engines, boilers, with seemingly no explicit reason for being there. I imagine it would be easy to get lost amongst such a place as this. Still the Imperial War Museum has taken the time to recreate life aboard the ship as a series of tableaux, some of which you can walk around and get up close to the (rather dodgy looking) models thus pretending that you are aboard with the crew. Still it was relatively empty considering in its heyday there would have been between 700-1000 men all sharing the little washrooms with their rows of silver handbasins. 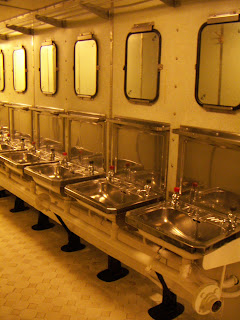 I am always ambiguous about looking around museums essentially about war, it is often easy to get lyrical about the torpedoes on display quite forgetting that they are used to blow other ships to pieces. So I was not surprised that the idea of war was not questioned although the museum did concentrate on the human aspect of war and the experience of the men on board. Still, I am glad that I am not a sailor, I think I would go mad cooped up for so long despite the well stocked shop on board and the rum ration! And the thought that they had to do dental procedures and emergency operations whilst the ship was pitching and rolling about all over the place made me feel quite queasy. 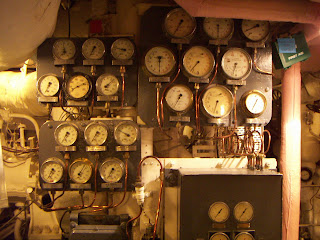 So all in all it was worth it to see the ship alone and to appreciate how complex and confusing an organically (kind of) grown thing it is. At least it looks like some mad kind of organism below decks. I am not sure you really need a museum to convey this and the museum element certainly seemed more fun than serious or educational yet its appeal was that it did not take itself too seriously. And I had the guide book if I wanted something more serious (purchased in a moment of guilt after I asked for a student discount....) 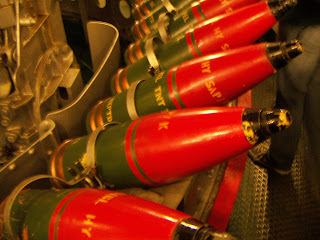