At home with Byron - a Trip to Newstead Abbey

Through thy battlements, Newstead, the hollow winds whistle;
Thou the hall of my fathers, art gone to decay;
In thy once smiling garden, the hemlock and thistle
Have choked up the rose which late bloom'd in the way
On Leaving Newstead Abbey, Lord Byron
Newstead Abbey is best known as the home of the Romantic poet, famously described by Lady Caroline Lamb as 'mad, bad and dangerous to know', George Gordon, 6th Lord Byron, who was born in 1788 into gentile poverty and died of a fever in Greece fighting for its independence from the Ottoman Empire. However, he hardly lived there throughout his short life. It was in a bad state when he inherited it from his great Uncle the 'Wicked Lord' William, 5th Lord Byron, who had to sell off most of the furniture when he got into debt, and Byron too similarly got into financial difficulties, which necessitated him selling off the house in 1818 to his friend, Thomas Wildman. And despite the fondness he seemed to demonstrate in his poem, 'On Leaving Newstead' (1803) there is little evidence that Byron took great care of the house, using the Great Hall for pistol practice! Newstead Abbey has been owned by Nottingham City Council since 1931 when it presented to the city by the philanthropist Sir Julian Cahn. 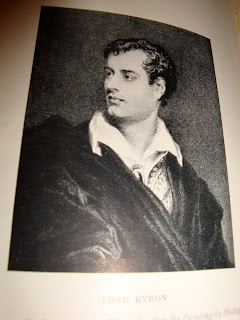 It is possible to get to Newstead by public transport and I took the train from Nottingham station to Newstead village, about two miles from the House itself. You can walk or cycle along the old drive that leads to the House, it has been closed to cars except for residents so makes a very pleasant walk through countryside. 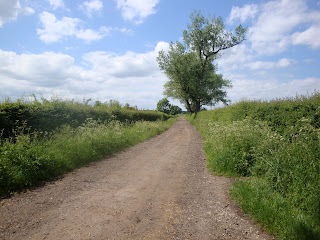 The two gateposts signalled that I was going the right way! 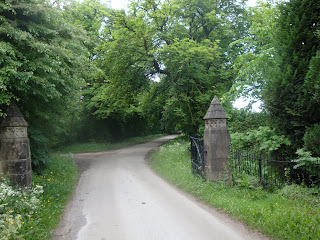 Walking along the drive, you emerge from the woods to see the House sitting down the hill within a slight dip in the landscape. To the left of the house is a large lake and fountain, making a very picturesque scene. The unusual frontage of the House, with the ruins of a monastery incorporated into it, stems from its origins as an Augustinian priory, founded by Henry II in 1163 in atonement for the murder of Thomas a Becket, the Archbishop of Canterbury with whom he had a very stormy relationship ('Who will rid me of this turbulent priest?' he is supposed to have said, with fatal results). 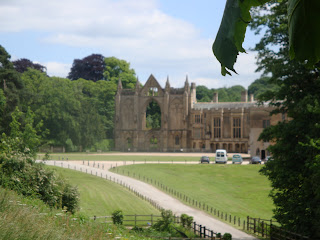 The ruins give it a very dramatic, if melancholy, atmosphere. It would be good to visit on a dark stormy night, the moon shining through the ruins of the Abbey's large window. 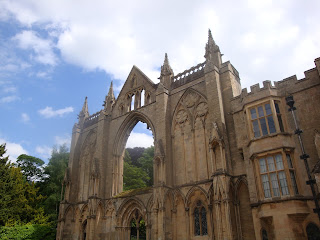 The House itself has been restored as far as possible to how it looked when William Wildman purchased it in 1818. With a fortune from plantations owned by his family in Jamaica, Wildman set about restoring the house, which was probably left in a right state by the excessively debauched Lord Byron. It is a rambling place, the rooms decorated in a very heavy, Gothic style with dark wood panelling and painted ceilings to ape the 'baronial' style that was popular at the time. Of note are four fireplaces from the 16th century which are supposed to have come from another Byron residence in Nottinghamshire, Colwick Hall, replete with carved figures, and some bits of furniture which actually belonged to Lord Byron, including his bed and an amazing screen that Byron decorated himself with pictures of his favourite actors from the theatre and sportsmen that he admired.
In fact the house itself is more or less a shrine to Lord Byron, despite his short tenancy. There is an exhibition in the library which contains a collection of memorabilia of the poet, including a very handsome green velvet jacket that could have been worn by him and would not look out of place in Topshop today! As a celebration of the poet and his life it rather obviously sanitizes the worst aspects of his character and glosses over the numerous incidents which saw him leaving Britain, forever as it turned out, in 1816 for a life on the continent. Brought up in a world of sexual deviancy, that Lord Byron was 'beyond the pale' to his peers suggests just how bad he was! However, he also inspired extreme loyalty from his friends, and this exhibition prefers to dwell on his more heroic aspects like his support of social reform and spirited defence of the 'Luddites', men who sought to destroy the new technology they saw taking away their jobs, and his involvement in the fight for Greek independence. Unfortunately for Byron he was not to die gloriously in battle but of a fever and possibly botched medical treatment.
Alongside all the reminders of Byron - who you can almost imagine striding round the house in some suitably dark, melancholy poetic mood - there are a few remains left of the medieval monastery, including a doorway in the Great Hall, a garderobe (toilet) in the dining room and some pillars peeping through the wall in the cloisters (see picture below). 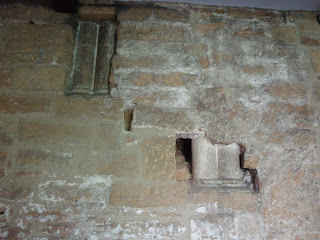 The cloister walk is one of the most pleasant spaces in the house. Originally built in the 15th century, there is a small garden at their centre around a water conduit carved with amusing animals, including a very jaunty looking rabbit. 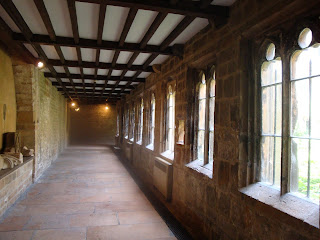 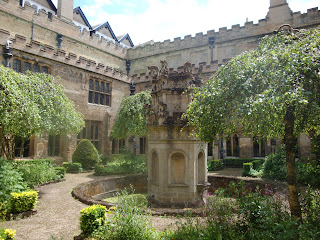 The House is surrounded by extensive gardens, divided into formal and less formal sections. From the 19th century the house was frequented by visitors, the railway station in the village being provided by one of the later owners of the House. 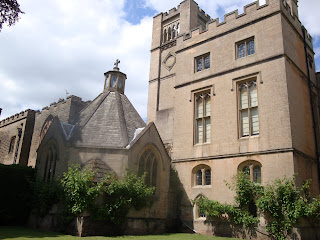 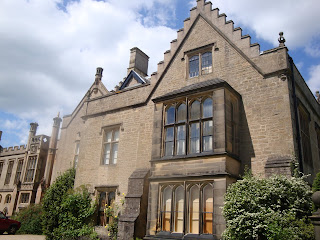 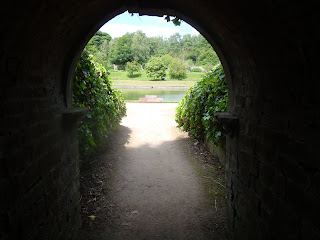 Close to the House is a large tomb in honour of Byron's favourite dog, Boatswain who died in 1808. It is inscribed with the poet's epitaph and Byron apparently intended to be buried there himself, which suggests why the tomb itself is so grand. Byron is famous for having a large menagerie, which at one time is supposed to have included a bear. 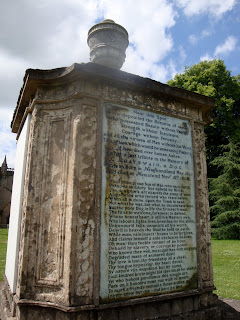 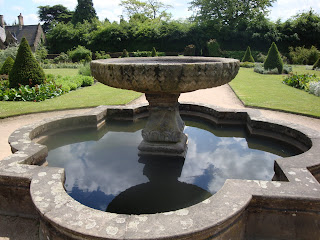 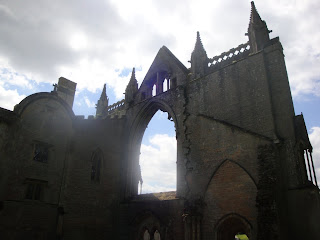 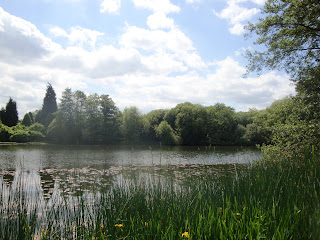 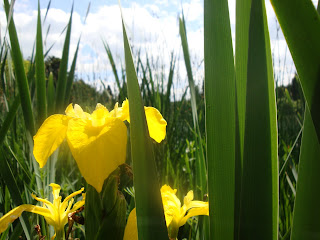 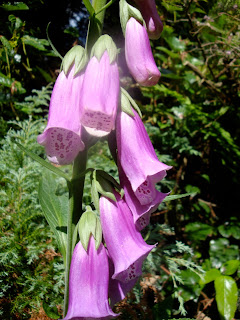 Before I returned back to Leicester, I stopped off in the small town of Hucknall to visit the church of St Mary Magdalene where Byron and his family are buried, also his daughter Augusta Ada King, Countess of Lovelace who is famous for writing what is considered to be the first computer programme. Father and daughter barely met in life - Byron separated from his wife Annabella not long after Augusta was born - but are united in death. Unfortunately the church was not open, but there is a memorial to the poet in the gardens. Another notable memorial is one to Benjamin Caunt, a famous bare-knuckle boxer of the 19th century. 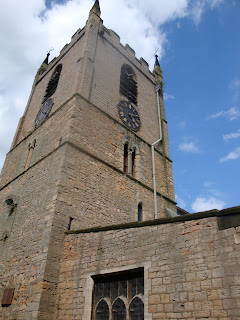 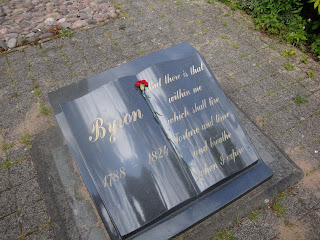 I am indebted to 'Newstead Abbey: Historic House and Gardens, A Tour of the House' produced by Nottingham City Council (and available from the House) for the information contained herein. Also a leaflet called 'Walk & Talk the Heritage of Hucknall' for information about the Church.
Labels: Heritage Historic house Local History Reviews

Garun Víkingur said…
Thank you for this wonderful introduction into the Lord Byron Museum! I for one can say that I would LOVE to visit that place!
Friday, June 25, 2010 11:46:00 am